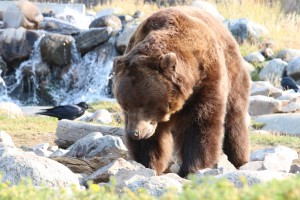 Going through the hundreds of photographs from our September roadtrip is a true labour of love, as was the roadtrip itself.  We drove over 3000 miles through some stunning scenery and enjoyed every moment of 5 National Parks : Grand Teton, Yellowstone, Arches, Bryce Canyon and Zion. The images I made are a great reminder of one of the best trips to date.  Did we try and pack in too much, probably.  Would we do the same again, definitely!  We did have some long drives between places, getting from West Yellowstone, MT to Moab, UT was a full day’s drive.  We didn’t stop in Idaho, despite even the temptation of the Potato Museum (what could possibly be in there?).

One thing this trip did was to let us sample many different places. I would definitely like to spend more time in Grand Teton NP and Yellowstone NP.  It would be great to have the luxury of ambling around, staying put to see what wildlife comes past, taking some hikes along the many trails to see different viewpoints of places we only managed to drive past.

The burning question though is, did we see any bears? Well, sort of, aside from the lovely pictures of the grizzlies in the Wolf & Grizzly Discovery Center in West Yellowstone on our last day before heading south to Utah, we did see a bear in Yellowstone NP.  Albeit at dusk through a professional photographer’s camera sporting a 600mm lens with 1.4 teleconverter and ISO through the roof !  But we did see the bear some 200 yards away, who had apparently been there all afternoon sleeping and guarding an animal carcass.

Bison were so prevalent as to be common-place, but nevertheless they had an enduring fascination.  Talking about the Yellowstone wildlife at the Wolf & Grizzly Discovery Center, a guide warned about staying a safe distance from any of the animals.  A bear may look like he lumbers clumsily around, but he can cover that 100 yards between you and him in just 7 seconds.  A bison may seem a docile beast, but stress him out by getting too close and he becomes a bad day waiting to happen.  A bull bison can weigh 2000 pounds and come charging towards you at 35 mph, the results of such a meeting would not bear thinking about.

Then there was the stunning scenery.  I am primarily a landscape photographer so all of these national parks presented some wonderful opportunities to make some great images. Doubtless I’ll be tweaking the raw files for months to come, but included some initial pictures in the galleries of this site.  Our visit to Arches NP turned out to be perfectly timed.  One thing we didn’t have with our itinerary was much flexibility between places, so I had to be content with the light and conditions as we found them.  There had been some heavy rain and flash flooding the day before our visit to Arches, and it was still cloudy and sullen when we arrived.  Sadly the road to Delicate Arch was closed due to flash floods, but some of the best pictures I got were of sunlight peeping through the heavy clouds to light up the rocky outcrops in a wonderful red glow.  Possibly better and more dramatic pictures than if it had been full sun and a clear blue sky.  So that just goes to show – enjoy whatever nature offers.

After the 3000 mile trip we felt totally drunk on sightseeing and would have not considered stopping anywhere else on our way from Mt Carmel, UT to La Jolla near San Diego, CA.  That was about a 9 hour drive which we did with stops roughly every hour to change over driving, a tactic that worked really well.  We arrived at the hotel in La Jolla just after 5pm and felt fresh enough still to enjoy going out for a meal.  Then followed a week of lazing on the beaches, swimming in the Pacific Ocean before flying back home with lots of memories and pictures, also with a desire to explore some of the places again but at a more leisurely pace.  Perhaps a plan for next year?